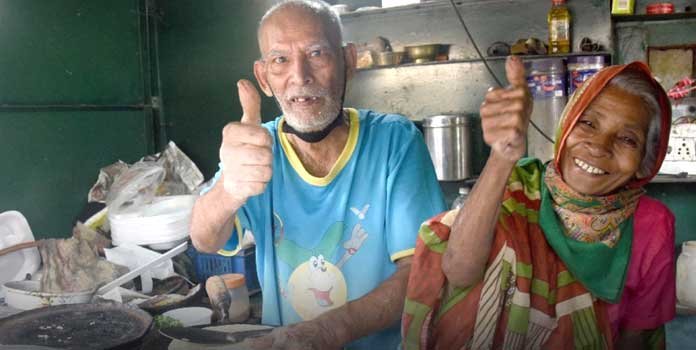 The story of ‘Baba ka dhaba’ : Baba ka dhaba, which became viral nowadays, is just a tiny blue box on the road side. This Baba ka dhaba is in Malvia Nagar, opposite to Hanuman Mandir in South Delhi.

Our story ‘Baba ka dhaba’ starts when Gaurav Wasan, a food journalist, visits this Dhaba. He has his own youtube channel, Swad Official. He posted a 11min video on his channel about the dhaba owner. In addition to it, he also posted a small story of 4 min on his Instagram on 7th October.

The video shared by Gaurav Wasan shows a tearful aged man, the dhaba owner talking about the hardships he is facing. The aged man is 80 year old Kanta Prasad. In the video, wiping his tears, he says that ”Ever since the lockdown, life has been miserable’, as the people stopped eating outside food.

The story of ‘Baba ka dhaba’

The couple, Kanta Prasad and his wife Badami Devi started the food stall in 1988 for their survival. He and his wife come at 6:30am and start preparations. They make the food ready by 9:30am for sale. This is their daily routine. The cost of one plate is Rs.50. It comprises dal, rice, two vegetable curries and a pickle.

Their life was once happy and calm but covid-19 has changed their life picture. Their life became a struggle for existence as they are unable to earn more than Rs 70 a day.

Also Read : This Indian woman lives on Tea for 30 years

Baba ka dhaba video went viral overnight. It is an example how social media can bring a tremendous change sometimes in the lives of persons. After watching the video people were touched and turned to this outlet. As a result their food is easily selling out, bringing a raise in their business. In Fact, it brought a smile on their troubled faces. Above all, the video was also shared by celebrities, Raveena Tandon, Sonam Kapoor, Randeep Hooda. They urged the people to visit Baba ka dhaba. The AAP’s Somnath Bharti even visited the dhaba the very next day.

They are listed on Zomato now. The Zomato team is working with this elderly couple for online food delivery. On the whole, the overwhelming support is a ray of hope for the old couple’s family.