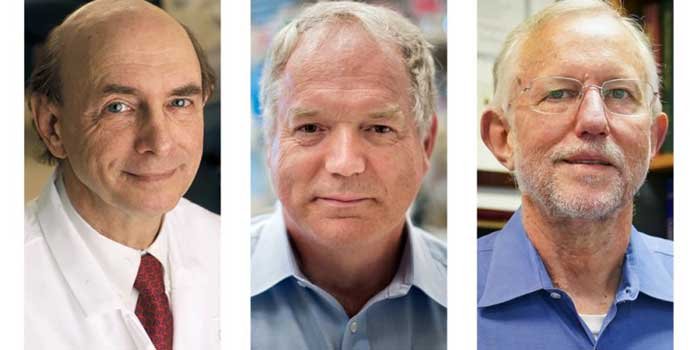 Three scientists bagged Nobel Prize in Medicine for the discovery of Hepatitis C virus. They are Harvey J.Alter, Michel Houghton and Charles M.Rice.

• As they discovered the identification of Hepatitis C virus.
• Which is a blood borne disease and further it may leads Cirrhosis and liver cancer.

Why this discovery bagged Nobel Prize (2020)

Initial step with Hepatitis B

• In the 1960’s Baruch Blumberg proved that a virus is cause for blood-borne Hepatitis.
• Which become known as Hepatitis B.Thus it leads development of diagnostic tests and best medicine as well.
• For his work in medicine Bloomberg won Nobel prize in 1960.
• The remaining large blood-borne Hepatitis cases challenged the Scientists.

The contributions of Harvey J.Alter towards discovery of Hepatitis C virus

In fact, the discovery of Hepatities B could not explain the number of blood transfusion cases.
• Further, Harvey J.Alter from USA discovered that Hep B is a blood transfusion disease.
• At the same it is also confirmed that Hepatitis A is transmitted by contaminated water or food.
• The unknown illness further called as non-A, non-B Hepatitis.

The unknown illness further called as non-A, non-B Hepatitis.
• To find out the facts, Michel Houghton and his colleagues, From UK did experiments on Chimpanzees.
• Further his work proved that the clone they found is a novel RNA virus of Flavivirus family. • While their research, he isolated the genome of the new virus. Which was named as Hepatitis C.

Charles M.Rice, while working with RNA viruses, injected Hepatitis C RNA into the liver of Chimpanzees.
• Then the virus detected in the blood of Chimpanzees.
• In fact, the pathological changes as same those seen in chronic diseased humans.
• Since it was the final confirmation Hepatitis C virus alone cause for unexplained Hepatitis for many years.

Also Read : Indians made up the corona virus vaccine

How the discovery is useful

• Most importantly, the discoveries by these three Nobel Scientists are very useful to mankind. As, They saved lives of Many people.
• Their researches using in blood tests to find out the virus. However it should break risk of transfusion around out the world.
• As a results of their work, anti viral drugs developed, that can even cure the disease. So let us congratulate and thankful to these Scientists who got this year Nobel prize.