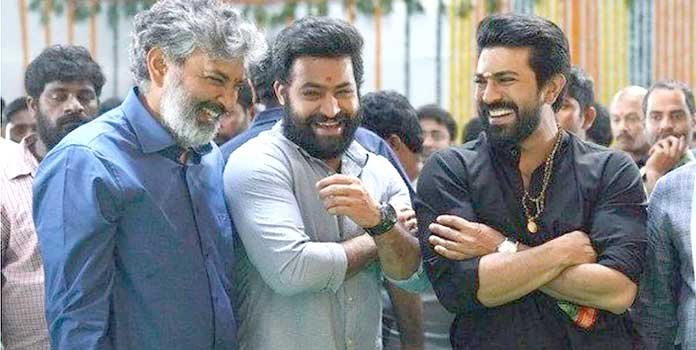 “Jakkanna RRR is back to shoot soon”. The RRR team announced the big news in its latest promo. Particularly, the Fans are celebrating the news. As they are vigorously waiting for even little updates from the RRR team.

Actually, the shooting stopped in March due to the COVID-19 pandemic and Lockdown. Finally, The government gave permission for all film shootings in June second week. Even so, there are no updates from the team RRR.

Meanwhile, the Director SS Rajamouli is tested positive for Covid-19. Fans have been eagerly waiting for the next updates as he recovered from COVID.

After, the blockbuster movie Bhahubali 1 and 2, the Director SS Rajamouli becomes India’s most popular and leading Filmmaker.

Even, the PAN Indian audience has been waiting for his next project. Actually, Bollywood celebrities also wanted to work with jakkanna.

In this time Jakkanna had set up a crazy combination with the two Tollywood superstar’s Ramcharan Tej and Jr.NTR.

It’s certainly, captured the PAN India’s attention. Every official update from the team RRR will be the top trending in social media.

Basically, the multi starrer combinations in Tollywood is rare. Very few heroes have done these combinations. Due to the huge and die heart fan following, the star heroes have been selecting stories according to their image.

RRR backdrop and the Storyline

Particularly, the Director SS Rajamouli revealed the storyline and backdrop of the film at the project announcement time. It is a periodical film that belongs to the 1920’s times. Moreover, the fictional story is about two great Telugu independent freedom fighters.

One of them is Komuram Bheem, who belongs to Telangana and revolt against the Nizam dynasty for the Adivasi’s rights.

Another great freedom fighter Alluri Seetha Ramaraju belongs to Andhra Pradesh and revolt against the British Dynasty for the Tribal rights.

One more huge surprise from the RRR

A Very big surprise for the young tiger NTR Fans. Apart from this, the team RRR is planning to reveal Jr.NTR role and first look as “Komuram Bheem” in very soon.

Actually, the RRR team was planned to reveal Tarak’s first look and promo on May 20th on the occasion of Tarak’s birthday. Due to the lockdown, the promo works have not been done in time. In this regard, Tarak fans are extremely disappointed.

Now, this is the time for celebrations for NTR Fans. Let’s see how wonders and records will create this promo.

Finally, the RRR success will decide not only the future combinations in Tollywood but also the legacy of South filmmakers in Bollywood.